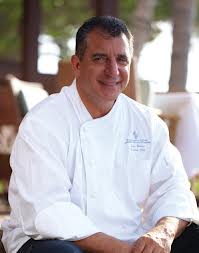 Now Executive Chef at The Four Seasons Resort, Chef Babian  began his career in the culinary arts humbly as a teenage cook at his father’s Connecticut supper club. A Midwest native with an East Coast upbringing, he never once imagined he’d become a long-time resident of Hawaii. “For me, living and working out here in the Islands is really incredible,” says the Illinois native. “The local resources here on the Big Island, from fish to fruits and vegetables to beef and pork, cheese and coffee, allow me and my team to create really special dining experiences.”

Babian’s career has allowed him to explore various cuisines, taking the best elements with him as he continually perfects his craft. From Connecticut and his own restaurant, The Wild Mushroom, to neighbouring Giannetta’s Cucina Italiana and all the way to the Hawaiian Islands, he has always focused on three guidelines for his cuisine: “Seasonal, regional and artisanal.”

No stranger to the spotlight, Chef James has appeared extensively on television, including on the Food Network’s Follow that Food and BBQ with Bobby Flay, as well as the Today Show and Australia’s The Great Outdoors. He took “Best in Show” at the Las Vegas Culinary Challenge and has cooked at the James Beard House in New York City. He was twice-honoured as Big Island’s American Culinary Federation (ACF) Chef of the Year; and has taken top honours in many other culinary challenges in Hawai’i and beyond.

Overseeing the Resort’s four dining outlets, in-room dining, banquets, special events, and residential and catering services is a full-time job and then some. “We’ve got a very talented and diverse team here, from all over the world, all with different influences and talents. My culinary team is challenged every day to provide excellence and creativity,” he says. “We come together with a common passion to put together beautiful food and to make experiences for our guests.”

But his passions don’t just end here. Chef James’ biggest passion (which happens to be outside of the kitchen) is his beautiful family – wife Christine, son Jake and daughter Jaelyn.