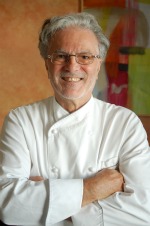 Born in Marseilles to an Italian mother and Greek father, who both moved to France as young children, Chef George Mavrothalassitis (or Chef Mavro, as he’s more likely to be called) is well-versed in Provençal cooking, and trained under Jean and Pierre Troisgros, Gerard Vie, and Alain Senderens. With that strong, classic French pedigree, he could have been a great chef in Paris or New York City.

But instead Mavro chose Hawaii as his home, moving there in 1988 and melding his French classicism with a fondness for fresh-caught fish (he is a frequent face at the local fish auction) and exotic produce. Having already run his eponymous restaurant in Marseilles, Mavro decided to adopt the Hawaiian islands as his home. He worked first at La Mer and then as executive chef of the Four Seasons Resort in Maui. Finally, a decade after moving to Hawaii, Mavro opened his own restaurant again.

With Chef Mavro and as a founding member of the Hawaii Regional Cuisine movement—12 chefs who pushed the islands toward using local ingredients—Mavro helped change Hawaiian cuisine. He has since become a magnet for awards and accolades, collecting them as he does local art (his restaurant is filled with glass-blown “flames,” abstract art portraits, and local wood paneling). He was recognized in 2011 by Wine Spectator as one of the most important French chefs in the United States, has been nominated several times by the James Beard Foundation, and won a Beard award in 2003 for the Northwest/Pacific region.

Mavro’s influence over the Hawaiian culinary scene is still strong. Chef Mavro has become a training ground for some of the young talent on the island, including Andrew Le, Mark Noguchi, and David Chong. In 2009, he created Restaurant Reality, a twice-a-year program for culinary students that focuses on both in-kitchen training and local farm tours. He also sits on the executive board of the Hawaii Culinary Education Foundation, which focuses on developing culinary training programs at community colleges across the state and promoting Hawaiian culinary traditions.